"His playing is a model of what fine interpretation is all about."
~ The Clarinet
​ 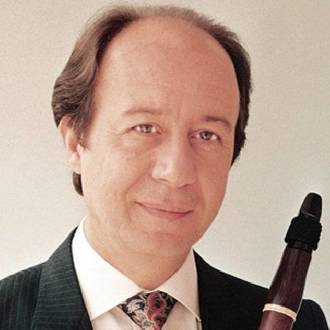 In her book Clarinet Virtuosi of Today, British clarinet historian Pamela Weston describes Mr. Rossi as "the only top player in the world performing with instruments of his own design and construction."

Praised for his "supple, soaring melodic lines", and "effortless technique" (-The Clarinet ), and declared a "first rate soloist" (-La Nación ), Luis Rossi has established himself as one of the most prominent and versatile Latin American musicians of his time. Awarded the Konex Prize in 1989, an honor he shares with fellow Argentineans Martha Argerich and Daniel Barenboim, he was one of three clarinetists to be awarded an Honorary Membership of the International Clarinet Association this past spring, along with Eddie Daniels and Richard Stoltzman.

Based in Latin America, Mr. Rossi regularly performs all of the major clarinet concertos throughout the world, and has devoted much of his performance calendar to pioneering contemporary music, as well as lesser known Romantic works. His live recording of the Mercadante and Stanford clarinet concertos was described as "exhilarating, and totally committed' (-The Clarinet ). He has released six CD's, which are accessible for purchase online, and through most digital distributors.
Alongside the Simón Bolívar Orchestra, he gave the South-American premiere of the Corigliano Clarinet Concerto in 1999. Mr. Rossi has also given the world premiere of two new concertos; one by Colombian composer Blas Atehortua, and another by Venezuelan composer Adina Izarra. Both works were written in dedication to the soloist. Mr. Rossi also enjoys creating arrangements to suit his instrument, for which his choice of repertoire reflects his long-held affection for Latin American composition and musical aesthetic. His arrangement of Paquito D'Rivera's "Aires Tropicales" for clarinet quintet was published by Boosey & Hawkes.

An active chamber musician, Mr. Rossi has recorded both Brahms and Mozart Clarinet Quintets with the Diabelli String Quartet, and has also collaborated with the Keller Quartet, the Amadeus Quartet, and the Camerata Bariloche, to name a few.

Mr. Rossi currently holds a teaching post at the Universidad de Chile. Abroad, he has been invited to give master classes and recitals at numerous institutions such as Michigan State University, Western Michigan University, Indiana University, Longy School of Music, Oberlin College, Ohio State University, and Cleveland Institute of Music, among others. His teaching activities in Venezuela's famed "El Sistema" , the Simón Bolívar University and the Latin American Clarinet Academy in Caracas have produced an outstanding generation of young clarinetists.

Born in Viedma, Argentina, Luis Rossi began playing the clarinet at age 13, when he moved to Buenos Aires to pursue his musical studies at the Conservatorio Nacional López Buchardo. He completed his graduate studies at the Royal College of Music in London, where he studied with John McCaw, who was at the time Principal Clarinet of the New Philharmonia Orchestra. Mr. McCaw was not only a pivotal influence to Luis's technical and interpretive approach, he also introduced his student to the mechanics of acoustics in relation to the clarinet; marking the starting point to Mr. Rossi's lifelong curiosity towards the craft of clarinet-making.

Mr. Rossi is the founder and owner of L. Rossi Clarinets, which produces a complete line of world-class clarinets. An innovator in the world of clarinet design, Rossi clarinets feature a single-piece construction in the middle section, many different bore styles, and several wood types, among many other unique characteristics.